The US Consul collects information on fishermen 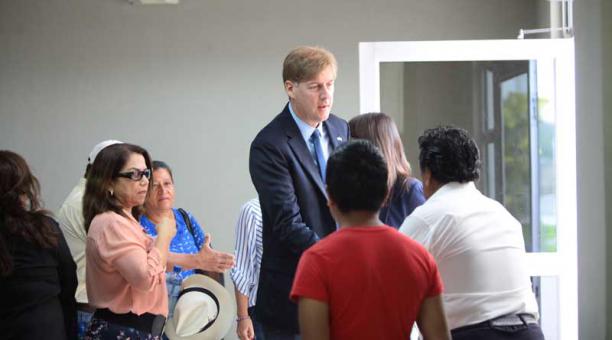 The recruitment of fishermen to transfer drugs to the United States also impacts the populations of Santa Elena. So far this year, 12 people have been detained in international waters and are serving sentences in the United States, according to the Captaincy of Puerto de Salinas.

The institution carries out control operations for the vessels of five fishing ports of this province: Anconcito, Palmar, Santa Rosa, Salinas and Chanduy. As part of these tasks, they operated up to eight miles offshore. From that distance, the control corresponds to the Coast Guard Command of the Navy.

Among the captured fishermen is Esther’s husband, the woman with whom he fathered three children. He is from Manabí and because of the economic situation he traveled to Esmeraldas, with the idea of improving his income with fishing. But things did not go well. “When we found out everything he started crying and told me he did it for us.” says Esther.

Before being captured, he had promised to return in two weeks to celebrate his birthday. That did not happen. In the midst of everything that happened, Esther heard of the case from another person imprisoned in the United States. The fisherman’s wife was left in charge of two children.

In the cooperative of Artesanal Production of Santa Rosa, five other cases are known. All ask for help to solve the situation of their relatives

For now, the United States consul in Guayaquil, Andrew K. Sherr, collects data from the apprehended boatmen. Last week he was in Manabí. He visited the fishing village of Jaramijó and met with leaders and relatives affected by the narcos.

For two hours he listened to the problems that villagers have regarding fishing and the sale of the product. The official also collects information on the offers that narcos make to fishermen and the threats they have received.

After that meeting, the Consul went to Manta, where he met with Navy authorities. In Santa Elena, the leaders point out that fishing activity has been low since 7 years ago.One reason for this is motor theft. Between January 2014 and April 2017, the Cooperative registers 158 complaints of this type, the number increases every year.

The captain of Puerto de Salinas, Boris Rodas, said that these robberies are related to drug trafficking. “Some of the boats that we stop have been ready to go out with food, fuel, without a nameplate and with new engines,” he said.

In 2017, the Captaincy found 1 360 kg. of drugs both on the beach and at sea. One of the shipments was found in Palmar, where lumps with the alkaloid were detected.

This week 600 kilos of drugs were found in jute bags at Acapulco beach, Ancón parish. In this police operation, seven people were arrested, who allegedly tried to distribute the cargo to Central America and then to the United States.

While this is done by authorities, the relatives follow the procedures with the idea of repatriating the prisoners. A few days ago, the lawyer that the United States assigned to her husband asked Esther for three certificates of good repute. In January, the justice of that country plans to announce the penalty imposed on the Ecuadorian (I)