The US increased interest rates, how does this affect Ecuador? 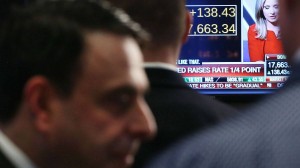 As a measure taken in the United States it seems that Ecuador does not suffer the consequences_ but there is actually a lot to worry about.

After the Federal Reserve of that country (FED)  announced on Wednesday a rise in interest rates to 0.5% annually -the first since June 2006,- there is concern among developing countries about the possible impact of the measure on their economies.

And the first effects are observed a few hous after the announcement. The price of a barrel of oil fell more than 3% today as a result of rising interest rates.

“When the dollar appreciates, the price (of a barrel) falls; when the interest rate rises, oil falls,” Fausto Ortiz, former Minister of Finance, told to Daily El Universo.

Julio Jose Prado, president of the Association of Private Banks of Ecuador (ABPE), concludes that the measure of the Fed can also mean a stronger dollar.
Source: http://www.eluniverso.com/noticias/2015/12/16/nota/5302197/eeuu-sube-tasa-interes-como-le-afecta-ecuador