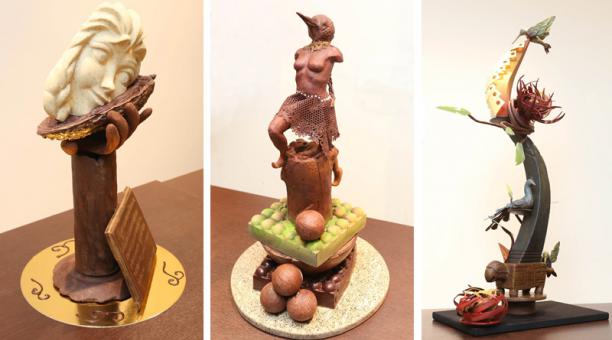 The tenth edition of the Chocolate, Cocoa and Coffee Fair left a mixture of flavors and textures in the senses. In this year, the event was not only starring products from the confectionery and chocolate: for 2018, the contestants put a firm step in the versatility of these in beers with chocolate, cocoa rum, espresso bars, granola with cocoa, coffee and cocoa dressings, cosmetics, condiments, and even chocolate decorations and even a dress based on the Ecuadorian product.

Between June 1 and 3, 2018, nearly 100 participants gathered at the Quorum on Paseo San Francisco, where some 15,000 people arrived. A good part of the exponents was part of the Consortium of Provincial Autonomous Governments of Ecuador.

14 provinces arrived with the Congope, to expose their ventures that are focused on community development. Edwin Miño, executive director of the institution, says that we must highlight the participation of provinces such as Tungurahua or Cotopaxi, which are not cocoa producers (as in the case of Esmeraldas, Santo Domingo or Zamora Chinchipe), but which are dedicated to the conversion of the raw material into high quality products.

One of the elements that most attracted the attention of the visitors were the works in chocolate sculpture that were inside and outside the contest.

For Marcela Larrea, who visited the stands during the last day of the show, one of the particularities of these works was the precision in the details. For example, after observing the piece Metamorfosis, by Paúl Llerena, of the chocolate shop Crustum 2850, she highlighted the level of carving that exists in both the head of the hummingbird, as well as in the dress that surrounds the anthropomorphic figure.

This work won the second place in the official selection. On the other hand, for Lucía de la Torre, who has a small business of chocolates in the south of the city, the work of the Equinoctial Technological University (UTE) was the one that shone the most inside the Hall, despite not being in competition.

Gabriel Díaz, who teaches pastry and chocolate at the center of higher education, said that the sculpture has 16 kilos of dark chocolate and that finishing the work took a team of 9 people, three days of eight hours a day.

Who participated in this piece were students and professors of the Gastronomy career. Along with the sculptures, the public was delighted with the wide range of liquors with chocolate and coffee that were in this year. Brands such as Aromaco, Licorcho, Secret Inti or Ballesta offered alcoholic beverages with a typical aroma and flavor of the country. Fernando Freile, master of the Ballesta brewery, said that this time people looked for elements to complement the taste experience of coffee and cocoa. (I)