The world´s richest men according to Forbes 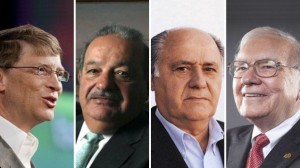 Every year Forbes magazine publishes a list of the richest men in the world , further details below :

Bill Gates tops the list with a fortune of 76 billion dollars , followed by Carlos Slim with a fortune of 72 billion , who has one billion less than last year. Forbes magazine reported that Slim was the only billionaire in the top ten that had losses in the past 12 months due to the fall in the value of copper and gold , which affected the valuation of Minera Frisco (Mining industry), and a new anti-monopoly anti law in the telecommunications field, which devalued shares of Telefónica América Móvil .

It should be noted that Bill Gates has held the No. 1 ranking in the last 15 years , dethroning Slim by being benefited from the rebound in Microsoft shares.

The third place in the list is occupied by the Spanish  textiles businessman, Amancio Ortega (owner of Zara ), with 64 billion dollars, followed by the U.S. investor Warren Buffett with 58 billion dollars. The fifth place is for the founder of Oracle, Larry Ellison, with 48 billion dollars.

The last five places are occupied by the investors Charles and David Koch, the casinos businessman Sheldon Adelson and the heirs of Wal -Mart chains, Jim and Christy Walton (the richest woman in the world according to the famous magazine ).

The tenth place is occupied by the French Liliane Bettencourt, principal shareholder of L’ Oreal .