“There is no waste” of water in Guayaquil and rates will not go up, says Jaime Nebot 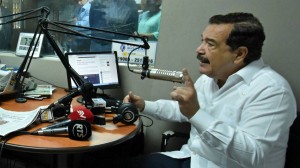 Guayaquil has one of the cheapest water services in the country and the municipality will not raise rates or remove the subsidy of water consumption, said Wednesday Mayor Jaime Nebot in his usual radio address.

He also rejected the statements of President Rafael Correa last Saturday, when he said that the city receives water from the Daule-Peripa complex. According to the mayor, Guayaquil is supplied by the Daule River, which has a drinking water coverage of 98% and a collection efficiency of 96%.

With these clarifications, Nebot justified that there is no such waste in the city “mentioned by the president,”who announced the charge to municipalities by the untreated water supplied for its treatment, based on a calculation of excess water consumed.

Government official denounces alleged cases of corruption in the IESS