After the war between Israel and the Palestinian Islamist movement Hamas, hundreds of Gazans must learn to live with one less member in the Gaza Strip.

Ahmed Ayad, a 23-year-old became one of the victims of the attacks when splinters tore his arm apart, riddled his chest and killed four relatives, including two nephews.

According to estimates by the United Nations (UN), at least 1,000 Palestinians from the more than 10,000 wounded during the war, now have a permanent disability.

Although the Gaza Prosthetic Center has the necessary prosthesis, the city council accounts are in red numbers and it is not clear that the 25 center workers there may continue to work, says its director, Hazem Shawa. “Employees have not been paid for 3 months,” he said. 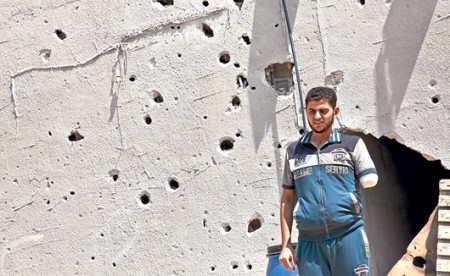 Ahmed Ayad was hit by a projectile during the bombing in Gaza. He is now one of the young gazans who have lost limbs.