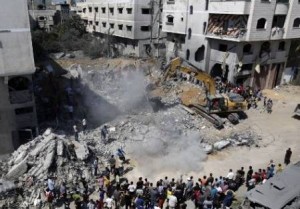 This Thursday Israel inflicted a setback to Hamas by killing three commanders of its military wing in the Gaza Strip, again bombed by Israeli aircraft which left another 16 Palestinians killed in the last hours, including four children.

The three leaders of the Qassam Ezedin Brigades died in a bombing in Rafah, in the southern location, 36 hours after a truce was frustrated and hostilities resumed, according to news agency AFP.

Two of them, Raed al Atar and Mohammed Abu Shamala, are among the most wanted men by Israeli intelligence services. The third is Mohamed Barhoum confirmed both sides in the conflict.

The attack on the commanders of the brigades left at least four more dead in Rafah and the attacked building into rubble as rescuers.