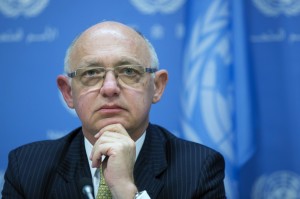 On Thursday, Foreign Minister of Argentina Hector Timerman resubmits the “Malvinas Issue” before the Committee on Decolonization of the United Nations, in New York.

Timerman confirms the full disposal of Argentina to find a “peaceful solution to the sovereignty dispute,” as evidenced by the numerous resolutions on the matter by the United Nations, which has not been possible yet as a result of the systematic refusal of United Kingdom to resume negotiations with the South American country.

Timerman’s commission is made up of Daniel Filmus, head of the newly created Ministry of Affairs Concerning Malvinas. In addition, there are national opposition officials, Julio Martinez and Patricia Bullrich, and Senator of the Socialist Party, Ruben Giustiniani.

In addition to addressing the issue of sovereignty over the Malvinas, the Argentine government formally protest to international organizations over the British militarization of the South Atlantic.

AP adds to the 17 changes in the Constitution an “amendment”