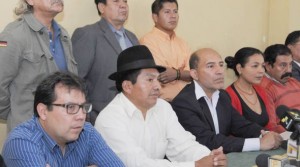 Organizations belonging to the United Workers Front (FUT for its Spanish acronym), social fronts, students, indigenous and peasants will carry out today the third mobilization, in less than six months, with a platform that involves the rejection of the Labour Code, of Decree 16, by a agricultural policy, access to public university and questioning of constitutional amendments.

The march will be held in Quito and will start at 16:00 from the Caja del Seguro to the San Francisco Square. There will be other demonstrations, according to the leader Mesías Tatamue, in Guayaquil, Cuenca, Portoviejo, Loja, Riobamba, Esmeraldas, Ambato and Latacunga.

Mesías Tatamue clarified that it is not about competing with the government, because they will not mobilize people in buses, but it will be a peaceful march and conscientiously, because people who are affected by actions of the regime will move.

President Fernandez will return to public activities next Tuesday