Today is the last debate on the Monetary Code 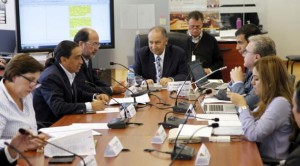 The National Assembly meets today to discuss the veto of the Executive on the Monetary and Financial Code, which consists of 56 observations. This will be the last debate that will take place on this document before its approval.

In his partial objection, President Rafael Correa proposed to reform the Eighteenth layout to the Social Security Act. In the veto is proposed that the Superintendency of Banks is the one in charge of controlling economic activity of public and private pension funds.

Assemblyman Ramiro Aguilar questioned this position, calling it illegal. He said this would allow the control of the money of private funds by the Executive and may even open the door for them to be invested in government bonds.

Virgilio Hernandez, a member of the Committee on Economic Regime and Assemblyman, said that the orientation of investment of these resources is not among the powers of the Superintendency of Banks, and the proposed rule seeks to ensure the financial health of these funds.

Among other main topics, the Commission also asked the Assembly to insist that the Board of Adjustment, among its many functions, issues the standard for appointing members of the Advisory Council.

In addition, the entity suggested not to accept the proposal of the Executive of establishing mechanisms for insurers, who are now in liquidation, to conclude these processes. The Commission argued that this should not happen because the law is not retroactive.