Today the Comprehensive Criminal Code must be approved 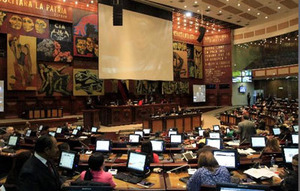 Criminal Code will be elected today by the Assembly

After 75 years of operation, the criminal law will be replaced by a lengthy document that today, Tuesday December 17, the National Assembly must approve the Integral Penal Code by votes that will begin at 09:30 in the Main Assembly.

The project has been pending for two years, it has received several reviews and there are no unions who oppose its adoption, especially after last-minute changes driven by Alianza PAIS, which were incorporated by the president of Justice Commission Mauro Andino.

Moreover Congresswoman Ximena Ponce (PAIS) talks about changes in about 300 of the 730 items that make up the code. These changes are in form and content, among these is the malpractice that continues to be challenged by physicians.

Controls to check “pre-campaigns” are being conducted

For the third time youths escape from a Riobamba prison