Tourist Routes were Inaugurated at General Cemetery of Guayaquil 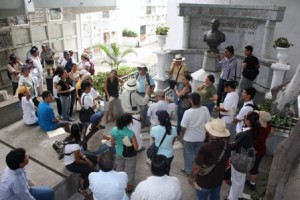 Yesterday, the General Cemetery of the Welfare Board of Guayaquil (Ecuador), described as Cultural Heritage in October 2003, celebrated its 188 years of foundation with a tour in its facilities.

The time was propitious to introduce the three tourist routes that have been established in this cemetery: the presidents and prominent figures, called “Among the greatness and the eternal footprint”; the artistic, literary, and musical area called “Beyond the shadow of the last verse”; and the route of the sculptures called “Memories and the flight of the angels.”

The General Cemetery is visited by foreign tourists, mainly from Europe, because of the great amount of architectural sculptures made by Italian and French artists in the nineteenth century. “Works that have been awarded by the Arts Academy of France,” said Reinaldo Navarro, administrator of the General Cemetery.

The Guayaquil Welfare Board together with Cultural Heritage trained a group of guides to show its architectural value. This cemetery holds a rich cultural heritage: There, personalities such as former presidents of the Republic, national heroes, popular artists, poets, and composers remain surrounded by altars, human sculptures, marble mausoleums with baroque, neoclassical, renaissance and modern styles.