Tourists delighted with culture, wildlife and hospitality of Guayaquil 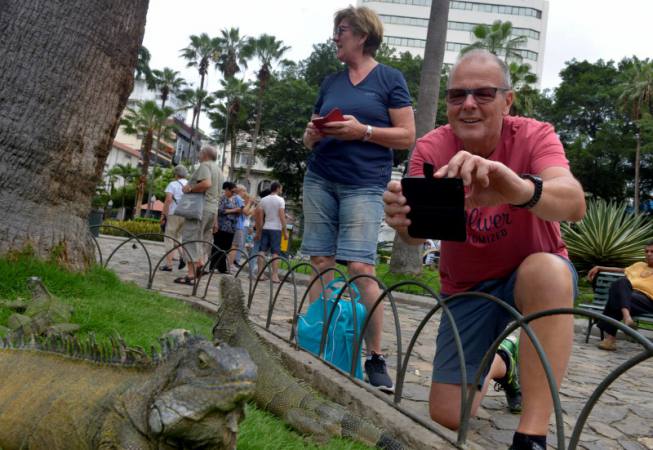 In one of the docks of the Sea Port, John Cock and his wife Ventura moved their arms trying to follow in the footsteps of the dancers who welcomed them, their repeated smiles appeared towards visitors coming down from two giant ships that were guests in the same day Unpublished fact

Faced with a mild drizzle, tourists from the United States and Europe descended from enthusiastic ships, such as Cock and Darian Fit. They went with their cameras, hats and fresh clothes.

By two stairs, one of each ship, the folkloric music of dancers accompanied and enlivened the descent of the tourists who spent the day in the city on Saturday. These two cruises brought 2,053 visitors, in the Albatros from Callao (1,006) and Sirena (1,047) from Panama.

At the pier, after 08:00, they began to leave towards different points of the city. Staff of travel agencies guided them on these journeys that pass the day. In groups they arrived at the Seminario park, the first point on their tourist map. All dressed in fresh clothes, in shorts and T-shirts, they differed from the city bustle by being amazed with every detail, passing through the cobbled footpaths of that place.

There, Thomas Miller discovered the groups of iguanas under a tree, made about ten photos from different points with the reptiles, photographed from afar and sought to approach the animal to admire its skin.

The walk of them continued to admire the architectural forms of the Municipality, the Morisca Tower and the monuments in that walk. “The people are very hospitable, nice,” said the American Miller.

These groups divided into subgroups of ten to fifteen people were divided among the different destinations. At the end of the boardwalk, Vic Charton, from Sweden, was hydrated while admiring La Perla, to continue searching for the MAAC art galleries and museum, where they learned about the ancestral culture.

In the souvenir shops they stopped to ask about the origin of these crafts and hats. Continuing along the cobbled street baptized Numa Pompilio Llona, a slight garúa did not stop the desire to be dazzled by the striking of the old houses of the Las Peñas neighborhood. “Very nice houses, architecture, I did not know it was so nice,” said Charton. There, some policemen, in Spanish and with signs, tried to answer some question of the tourists who arrived.

These farewells are expected to be changed by the Tourism Company, which is already working with the Ministry of the branch so that the vessels stay at least two days in the city.

Since October of last year until this month, Guayaquil has received seven cruises with a total of 4,847 passengers.

7 Cruises have arrived in the city so far this year

“We did not know much about Guayaquil, we liked the iguanas that are concentrated in one place, the architecture of the houses and the people who are willing to help. ” Mick Eriksen, Swedish tourist. (I)

Ecuador’s pottery is one of the oldest