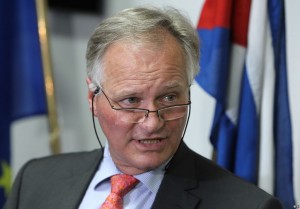 Yesterday, the Deputy Foreign Minister Leonardo Arízaga met with representatives of the European Union (EU) in Quito to finalize details on the consolidation of the trade agreement. The same is expected to take effect next year or at least in 2016.

Christian Leffler, Managing Director for Latin America, was optimistic indicating that the document of trade agreement with the European Union is expected to be ready for late November

“We believe that the adoption process by the ministers of the member states will be over, incitially, in the first half of next year, which will lead to the signing of the agreement. Once signed, we will seek the formal approval of the European Parliament,” he said.

On tariff preferences, which will end late this year, the EU analyzes the proposal of an extension of them until the sign and the possibility that these benefits can be granted retroactively.

“We will see what the member states accept because retroactive legislation is never good. But we are aware and the proposal is to create a transition between the situation of tariffs and free trade agreement,” Leffler said.