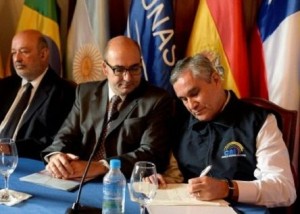 The electoral mission of the Union of South American Nations (Unasur) delivered yesterday to the National Electoral Council (CNE, the final report of the elections held in February.

The paper concluded that there were a number of difficulties in the process of transmission of results due to the failure by the company contracted for that task, the Spanish Scytl.

Likewise, it noted that there was a deficit in the quality control and supervision capacity by the election authority. In addition, the company did not submit any contingency plans for system failures.

For its part, the CNE President Domingo Paredes admitted that the integral system was not properly tested, but rather partially, based on 30% load, despite recommendations from Unasur.

This was not enough to verify the processing capacity of the system in real conditions, he added.