Transport, a ‘privileged’ sector of the regime 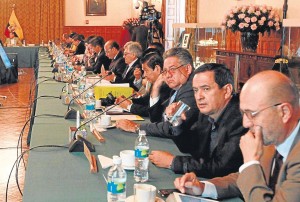 President Rafael Correa made a new offer transport representatives to organize the recruitment of drivers. Although the Ministry of Labour has not published the standard, the objective would regulate the labor market in this sector, according to Fabricio Vivanco, leader of the Federation of Professional Drivers.

The decision was made in early November after an appointment at the Government Palace. Transport leaders and the executive branch meet every six months to review the commitments.

At least ten agreements have been reached between the parties in the eight years of the current government. The first was to create the Ministry of Transport and Public Works, on January 15, 2007.

Another agreement was the application of the Renova Plan to purchase new vehicles; the removal of safeguards for 324 units; the granting of 3000 quotas for mixed transportation; quotas for the duty free purchase of tires; control to local governments for their “excesses” in the transfer of authority; and tire retreading. In addition to the compensation to avoid the rise of bus fares; and tariffs for the purchase of spare parts were eliminated. In the future, the goal is that drivers affiliate to the Social Security.