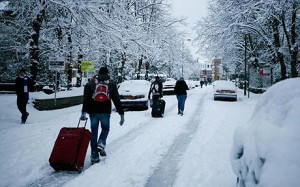 The international services of airlines and trains are returning to their normal schedules on Wednesday. But the effects of the ice and snow persist which has generated schedule chaos.

Interruptions on the airlines services and high speed trains in Europe that connect the United Kingdom with the continent created a pre Christmas nightmare for hundreds of passengers since last weekend. The complaints forced the airports that they should deal with these problems more efficiently.

The airport of Heathrow in London is one the most transited in the world, while the airport of Fráncfort is the biggest of the continent. Both suffered severe interruptions due to the bad weather. However the operations are returning to normality.

The Heathrow lane was reopened during yesterday afternoon, this offered hope to the thousand of passengers stranded in the international departures room. The operator of the BAA airport property of the Spanish railways published on their Web site that the Heathrow airport would operate until 6 am of Thursday.

Flights from and into the airport of Fráncfort were resumed during Tuesday morning after the airport was closed for several hours of the night. Meanwhile the airline company Lufthansa believes the situation on the German airport is under control and would return to their normal activities.

Meanwhile the Eurostar train company informed that their service would be once again resumed to normality.