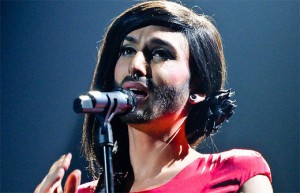 While in Austria Conchita Wurst´s victory is celebrated as a victory for tolerance and respect, in Ukraine she is heavily criticized

After Conchita Wurst, better known as the bearded transvestite, won the Eurovision Song Contest last Saturday, the President of Austria, Heinz Fischer, congratulated her, saying, “The fact she dedicated her victory to all those who believe in a future in peace and freedom, makes it doubly valuable. It’s a beautiful day for Austria. ”

Meanwhile, the Ukrainian Governor of Kharkov, Vladimir Varshavski, requested a referendum and asked the people of the region to refrain from being “with people like Conchita,” according to the Spanish newspaper ABC.

Conchita’s real name is Tom Neuwirth, who is 25 years old, and was received at Vienna airport on her return, by hundreds of fans.