Two planes and 40 cans of liquid drugs are seized in Milagro.

The Police and the Prosecutor’s Office seized two planes and 40 cans of liquid drugs in Milagro , a Guayas canton . The news was confirmed on the morning of this Tuesday, April 27, 2021. 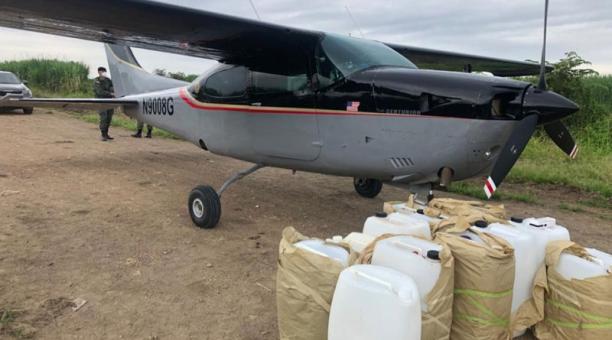 Agents of the Public Prosecutor’s Office and the Police seized two small planes that landed at a sugar mill in Milagro, Guayas province.

Through a statement, the Prosecutor’s Office indicated that the two aircraft landed at a sugar mill . While, the alkaloid was hidden in a ditch of water and earth.

A foreigner was arrested in this operation led by anti-narcotics agents. Two vehicles were also seized at the scene.

The Police are investigating the origin of the drug and the destination where this shipment would arrive.

The first indications indicate that behind the illegal shipment is a narco-criminal structure.

During this 2021, the Police have seized at least four more planes. The aircraft have been confiscated in Esmeraldas, Santa Elena and Guayas .