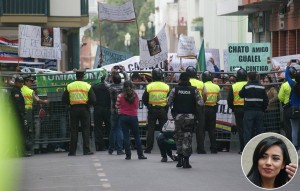 There were two sit-ins yesterday during the hearing that ratified the sentence of 30 days in prison to Councilorwoman Jeannine Cruz for the demand filed by Mayor Jose Bolívar Castillo. Some arrived with balloons that read ‘tweeting is not a crime’ and the other with posters supporting the plaintiff.

Defense attorney Adolfo Moreno said they will await for the notification to raise an appeal for review and said that Cruz will not go immediately to prison, but this “will depend on the court’s decision.” “And also on Jeannine’s position, because in issues like this, a common agreement can be reached,” he added.

The mayor sued Cruz for a tweet published months earlier in which she wrote: “Mayor Jose Bolívar Castillo what we Lojan people ask you is toq stop lying and stealing,” attaching the link of a complaint.

And this is based on Section 396 of the Penal Code which states 15 to 30 days in jail for uttering discredit or dishonor expressions uttered by any means.

More than 200 detainees in 26 ‘steps’ against crime

Correa and the Latin King signal