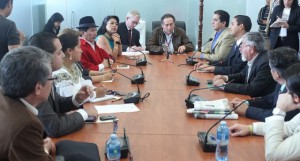 The Money Laundering Office investigates the accounts of two United States banks, to which the Argentinian Gaston Duzac would have been transferred the $ 800,000 he received as a loan from the Cofiec bank.

This was confirmed by General Attorney Galo Chiriboga, after the connection audience that was installed yesterday in the processing of this case that investigates the alleged crime of bank embezzlement by credit delivery without guarantees.

“We have clues in the investigation process. We have the accounts to which ($ 800 thousand) were transferred. When we procedurally know who is responsible for these accounts, We´ll say it, not before,” he said.