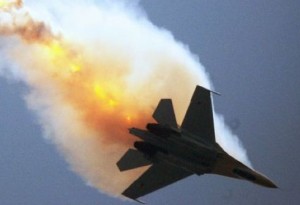 Ukraine says that the pro-Russian rebels have shot down two of their fighter bombers in Snezhnoye city, Donetsk region.

This place is situated about 25 km from where on Thursday a Malaysian aircraft crashed after being hit by a missile fired from an area controlled by pro-Russian separatists, causing 298 deaths.

One of the Ukrainian fighter bombers fell to the ground while the other would have continued flying northward before crashing.

“According to preliminary information,” the missile that brought down the two fighter bombers when they flew over the site “were fired from Russian territory,” the National Security Council of Ukraine said in a statement.

Both aircraft have been shot down with a portable air defense system (MPAD), composed of ground-air missiles.