U.S. confirms their support for Ukraine by the conflicts it faces 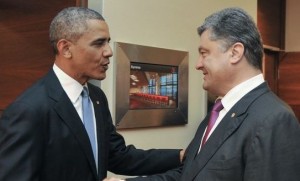 U.S. President Barack Obama met yesterday with the President-elect of Ukraine, Petro Poroshenko, to whom he conveyed his full support as well as strongly condemned the Russian “aggression” to his country and the annexation of Crimea.

Poroshenko, elected last May 25, received the support of the United States, through Obama, who will send “non-lethal” military equipment, such as night vision goggles for a total of $ 5 million to the Ukrainian Army.

Likewise, the Ukrainian President spoke in favor of an amnesty for rebels who are not involved in serious crimes, and he does not rule out a meeting tomorrow with his Russian counterpart Vladimir Putin, in the celebrations for the 70th anniversary of the arrival of the Allies to Normandy.

By far not confirmed any meeting between the two presidents.

Meanwhile, in an interview, Putin assured that Russia does not want to annex or destabilize Ukraine and has no military in this country, and indicated that if the U.S. claims to have evidence to the contrary, it shall present it.