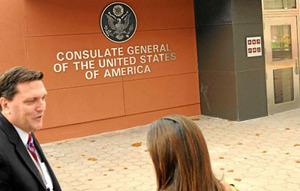 From next Monday, December 16th, the Consulate General of the United States in the city of Guayaquil serve its users in its new building located in the area of San Eduardo, on the streets Santa Ana and Jose Rodriguez Bonin diagonal to the department of the Judicial police.

The current headquarters, located on 9 de Octubre and Garcia Moreno, will work until Friday 13 December. As it was reported yesterday by Andrew Dilbert, the U.S. vice consul, during a press conference on the exterior of the new building.

Dilbert added that this change is to serve better the growing demand from users. “As the economy in the country has improved, there are more applicants each year, so a larger place was needed.”

More than 400 users visit the embassy daily to apply for a visa or other proceeding, the will no longer wait on the street as they do in the current consulate, who works for 50 years. The new building will have two waiting rooms, one internal and one external with chairs under tents. The new embassy, of two floors, will be pre inaugurated on Monday with the raising of the American flag, at 05:30. The official ceremony will be held in February next year.