U.S. Intervention in Iraq does not have full support 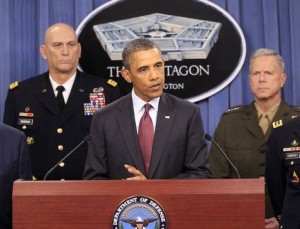 In a meeting with congressional leaders on Wednesday, Obama restricted himself to present options that the White House meditates to stop the jihadist advancing in Iraq.

Iraq Callings for the U.S. to bomb Iraq positions and the Levant (EIIL) do not have the full support of the Obama administration, nor the public opinion and neither the Congress makes pressure for the president to execute the order of an immediate attack.

One of the conditions to avoid an attack by the U.S. would be that the Iraqi Prime Minister, the Shiite Nuri al-Maliki’s, abandon the power to allow a government of national reconciliation that includes Sunnis and Kurds.

For their part, the Pentagon chiefs argue risks of getting into the Iraqi civil war and the dangers of bombing without defined political and military objectives.