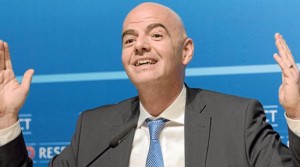 FIFA president Gianni Infantino is on the tightrope. The revelations of the International Consortium of Investigative Journalists point him out for a contract signed in 2006 with Hugo and Mariano Jinkis -the Argentine businessmen accused of paying bribes to appropriate football television licenses- to have the exclusive transmission of the Champions League in Ecuador. UEFA officials had denied that the current FIFA president had had links with the businessmen involved in the FIFAGate case.

Yesterday (April 6), federal agents raided the offices of the UEFA in Nyon, Switzerland. The investigators requested access to the contracts between that sports organization and the Cross Trading company, a relationship that was revealed in the context of mega-investigation of the `Panama Papers.´ Shortly afterwards, the Swiss Prosecution announced the opening of an investigation on “suspicion of unfair administration and embezzlement.” The investigations are not currently directed towards a specific person, but are related to the acquisition of TV rights and suggest “unknown authors.”