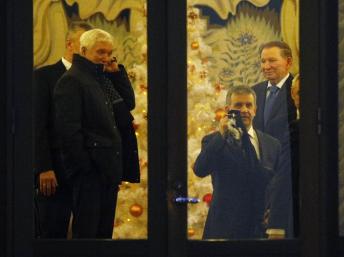 The Government of Ukraine and the pro-Russian separatists in east of the country on Wednesday resumed peace talks in Minsk, Belarus capital, which lasted more than five hours.

The meeting was attended by Ukrainian speakers, rebels, representatives of the Organization for Security and Co-operation in Europe (OSCE) and Russia.

As a first result of the negotiations, the pro-Russian announced this Thursday an agreement with the Ukrainian government to conduct a prisoner exchange.

“There is an agreement,” said the president of the self-proclaimed Republic of Lugansk, Igor Plotnitski, quoted by Russian news agency Ria-Novosti, to free 225 detainees Ukrainian separatists in exchange for 150 rebels imprisoned by the Ukrainian authorities.

The resumption of negotiations has been made possible by a conference call held on Monday, by German Chancellor Angela Merkel and French President Francois Hollande; Russia, Vladimir Putin; and Ukraine, Petro Poroshenko.

On Friday will continue negotiations where will be discussed vital issues such as the removal of heavy weapons, the economic blockade to the separatist territory and the fulfillment by Ukraine of a special status for the rebel regions.