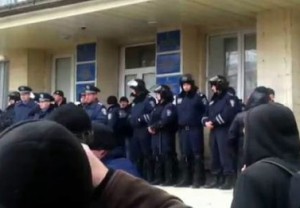 The Ukrainian President, Oleksandr Turchynov, formalized the decision of the National Security and Defense Council (NSDC) as ‘urgent to overcome a terrorist threat and preserve the territorial integrity of Ukraine,’ according to the press service of the Supreme Rada (Parliament).

The decree, signed this Monday, shall enter into force from the date of its publication, which remains unknown.

This action is executed after the pro-Russian activists groups have taken this Monday the City Council of Gorlovka hours after taking the Interior Ministry headquarters in the same city and the police headquarters in Horlivska, both in the Donetsk region.

According to local media reports, inside the building of Gorlovka shots have been heard from the police who opened fire on the assailants.

The Ukrainian Government yesterday issued an ultimatum for pro-Russian activists to abandon the official buildings taken in recent days, which expired at eight in the morning, this Monday (Spanish pensinsular hour). However, a Ukrainian army withdrawal has not been recorded yet.