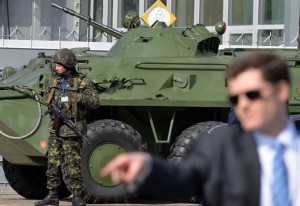 The Acting President of Ukraine, Alexandr Turchinov, today ordered the resumption of a military operation against pro-Russian separatist militants who revolted against the Kiev government occupying administrative buildings in the east.

`I demand to the security forces the resumption and implementation of effective anti-terrorist actions aimed to protect the Ukrainian citizens living in eastern Ukraine from terrorists,´ said Turchinov.

Turchinov also said that yesterday, near Slaviansk, two bodies `of savagely tortured people´ were found, one of which was recognized as Vladimir Rybak, the missing Deputy of the town of Gorlovka and affiliated to the Patria party, the formation of Yulia Timoshenko.

`Terrorists have kidnapped almost the entire region of Donetsk and have crossed the line to torture and murder Ukrainian patriots´ insisted Turchinov, who assuered that in this way separatists `released in an intrusive manner a challenge not only to our country, but to the entire world.´