Ukrainian Army continues its offensive in the east of the country 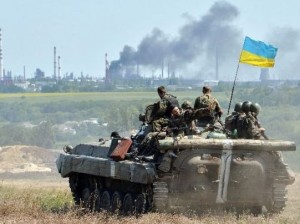 The conflict in eastern Ukraine continues in tense situation after the Army rejected the possibility of a truce and aims to gain control of the Donetsk and Lugansk regions.

On early Sunday Kiev continued the offensive in the vicinity of Donetsk, to tighten the noose around the main stronghold of the pro-Russian uprising, the press service of the organization reported.

“We hit the main bases of the enemy,” said a statement from the military command in Facebook, according to EFE. The insurgents suffered casualties without specifying the number of deaths or injuries as a result of the offense, the statement added.

Meanwhile, the rebels reported to the agency Interfax that the Ukrainian Army opened fire yesterday in the suburbs of Kirovski district, Donetsk at 04:00, leaving a total of 19 power substations damaged in the district Adminposiólok, reported the City Hall of the locality in a statement.