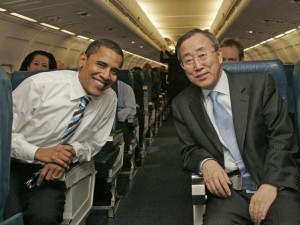 The recent violation of information on several political and diplomatic government agencies has caused a global distrust between countries. The Wikileaks revelations are going to put the United States in a tough position.

The American government is now accused of spying friends and foes alike. The seriousness of this matter is that the United States intelligence agencies use the information for diplomatic purposes. The nations that are members of the UN also have officials in charge of intelligence but there is a clear line that separates them from being spies, it seems that this line is not so clear for the USA.

At the moment, the UN is not making any statements regarding the diplomatic documents that the newspaper El Pais revealed. If there is proof that the United States has performed espionage on UN members it could mean their expelling from the world organization.

The only comments made by the UN general secretary, Ban Ki-moon, were that the world organization is transparent and it offers privileges and immunities thanks to the Bill of the United Nations, created on the 1946 Convention so that their main offices are in New York.

The Department of State insists that diplomats are that, just diplomats and their job are without secrets as representatives of other countries. Part of their work is to gather information that allows them a better political approach and actions of interest.