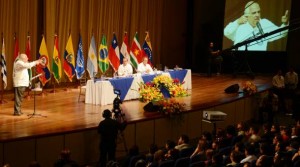 With a synthesis of what it represents the Union of South American Nations (Unasur for its Spanish acronym) to the region, Foreign Minister Ricardo Patiño opened the international seminar ‘Integration and convergence of South America’, at the Centro Cívico Eloy Alfaro of Guayaquil, this December 3.

The event precedes the inauguration of the Unasur building, which will take place on December 4 in Quito.

Ernesto Samper, Secretary General, who in his speech proposed the strategic vision of Unasur, said that convergence with solidarity, complementarity and citizenship, are the three fundamental elements this organism could contribute with for theapproach processes.

“The only way to embark on a process of convergence is that we understand we are all equal, but those who have more mustshare with those who have less,” he said.

The Secretary General also spoke about the creation of the South-South block. “Let´s do not look for opportunities outside because we are no longer the problem continent, we are the solution and opportunity continent.” He added that this possibility should crystallize soon. And agreed that: “Globalization is disrupting us.”

Assembly approves exemption of driving test to get the license