Unasur raises previous agreements for the next summit 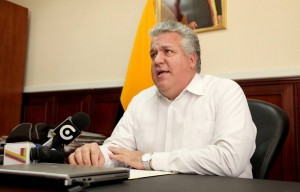 The deputy foreign ministers of the Union of South American Nations (Unasur for its Spanish acronym) held a meeting on Friday and Saturday in the Bolivian city of Santa Cruz, which resulted in an agreement “on the strategic vision” of the block with regards to energy and road integration, additionally on the regional passport.

“We have reached an important agreement on the strategic vision that we will present to the presidents,” who will meet between the 3 and 4 of December in Quito, said Ecuador’s deputy Foreign Minister, Leonardo Arízaga.

Diplomats from the region met to prepare the contents of the next summit of UNASUR.

“We have discussed some issues considered fundamental for South America by the natural resources issues and sovereignty we have on those resources,” added Arízaga.

On the validity of the regional passport, which was discussed at the meeting of the UNASUR deputy foreign ministers, the Secretary of this block and former Colombian President Ernesto Samper, said: “it is a proposal that will have to be refined by the leaders.”