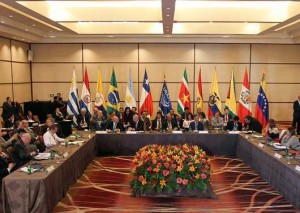 In Santiago, the representatives of the twelve member countries of the Union of South American Nations (Unasur) decided to support the legitimacy of the government of Nicolas Maduro, and to send a special commission to Venezuela with the objective of solving the political conflict in that country.

The chancellor Heraldo Muñoz, explained that they shall designate a team of ministers who `accompany, support and advice a broad and constructive political dialogue aimed to recover peaceful coexistence in Venezuela.´

The Minister of Foreign Affairs of that country, Elias Jaua, expressed his satisfaction with the support received from the South American countries.

Some of the present authorities stated their position on the conflict, agreeing with the resolution of this special meeting.

Ecuadorian Foreign Minister, Ricardo Patino, aimed at the rights framework on which the organism took the resolution and in which the objectives of the mission assigned are estabished.