Shark fishing, driven by the fin trade, is not incidental and is the main cause of the decline in the shark population. This is one of the conclusions of the scientific study “International fisheries threaten sharks in danger of extinction worldwide in the Eastern Tropical Pacific Ocean: the case of the reefer vessel Fu Yuan Yu Leng 999, seized within the Galapagos Marine Reserve (RMG)”, published last July in the journal Nature Scientific Reports. 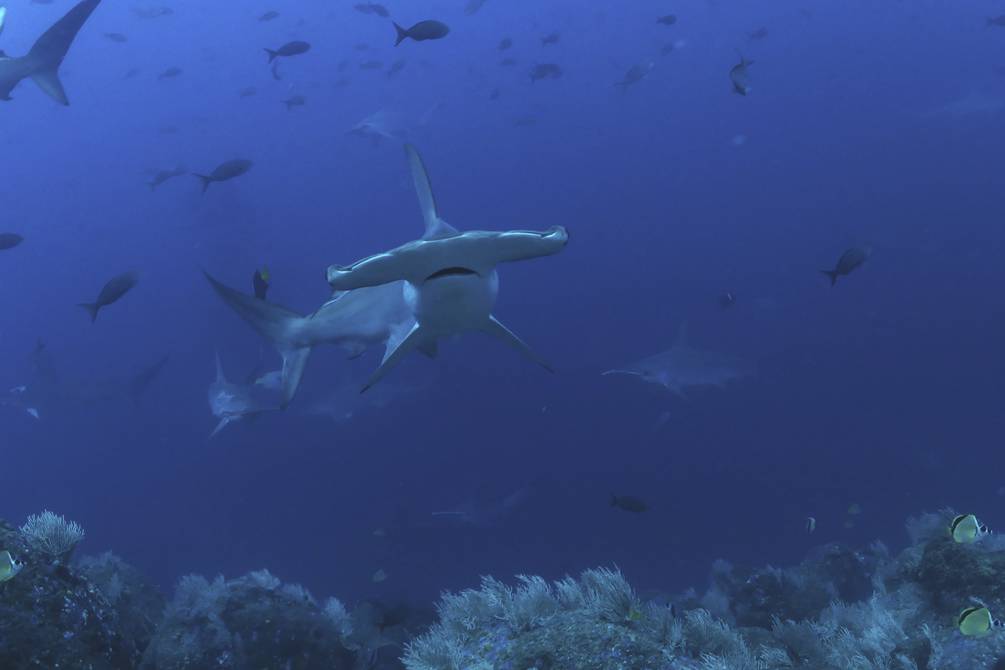 Sharks are one of the groups of species affected by overfishing.

The research, which was a joint effort between the Galapagos National Park, the Galapagos Science Center of the San Francisco de Quito University (USFQ) and the Ecuadorian Navy, focused on analyzing the remains of 929 sharks out of 7,639 that were on the ship. Chinese retained in 2017 by national authorities.

Twelve shark species were found on the ship: 9 considered “vulnerable” or “higher risk” and 8 are included in the Convention on International Trade in Endangered Species of Wild Fauna and Flora (Cites).

In addition, some of the vessels associated with the operation of the Chinese vessel would have used purse seines, which, for some species, is against international conventions. These data, the study indicates, expose the threat that fishing industries and illegal trade pose to sharks.

“Shark fishing is not incidental but intentional, because the proportion of fish that were not sharks (in the Fu Yuan Yu Leng 999) was very small compared to the volume of sharks,” says Elisa Bonaccorso, research professor at the USFQ and who participated in the investigation.

The retention of the ship exemplifies industrial operations that would be depleting shark populations in the region on a large scale, the research highlights. “The ship had a capacity of 4.5 times more than the number of sharks found. At least 30,000 sharks entered there”, indicates Bonaccorso.

Another of the alarming data is that the pelagic fox, the silky shark, the oceanic white tip and the blue shark showed a higher proportion of immature individuals. In fact, almost all of the individuals sampled from the oceanic whitetip shark were immature (96%), and for the silky one they were 86%. “In other words, they could not be reproduced, they could not be replaced in the next generation. This is a serious problem for conservation”, says Bonaccorso.

The Chinese ship was part of a large international fleet that in recent years is located in the international marine corridor that exists between the exclusive insular zone and that of continental Ecuador. The way of fishing of this group, of just over 300 boats, has been highly criticized. In the report of the Unesco World Heritage Committee, published in June of this year, concern is expressed about the presence of this fleet and, also, about the fishing within the GMR.

“Fishing in and around (the GMR) continues to pose a significant threat to its vulnerable species, as does the presence of a large fishing fleet from other States Parties in the vicinity of the GMR. It is recommended that the Committee exhort the States Parties to do everything possible to guarantee that the fishing fleets that operate under their flags do not affect species,” the report states.

The Mas Galapagos collective has promoted the expansion of the GMR as part of a comprehensive solution to the international fleet and to protect marine species. “All these problems have solutions from different perspectives, but from the perspective of the migratory routes of the species, enlargement is part of the solution. Now, it is not the only solution that must be taken to solve the problem”, says Bonaccorso. (I)

Ecuador will receive four million doses of Sinovac, after delays from China