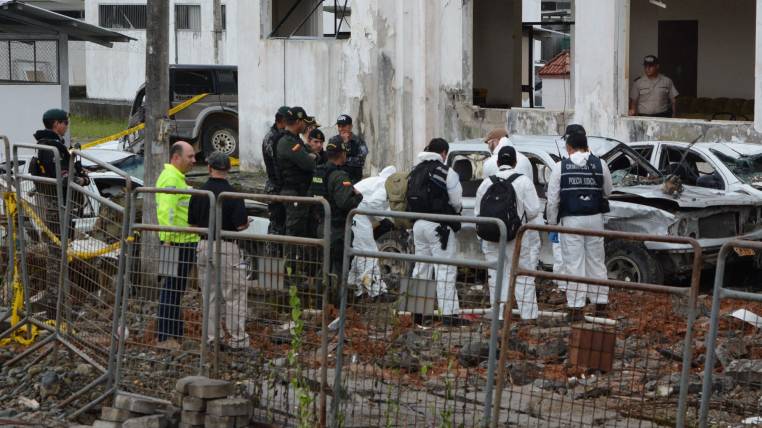 Next Tuesday, the national secretary of Intelligence, Rommy Vallejo, will attend the Assembly to report on the performance of an entity that, according to the Law of Public Safety and the State (approved in September 2009), is responsible for coordinating the external and internal intelligence tasks that warn about threats to national security.

According to experts, as it was published yesterday, it was the intelligence work that failed on the northern border (with Colombia) in the last ten years due to the dismantling of a system that gave way to another that neglected national security and prioritized the political espionage.

In total, the secretariat has a budget of about 50 million dollars, a part is reserved funds, for intelligence work. About 300 agents work in that entity that is required to render accounts every three months before the Commission of International Affairs and Public Security of the Assembly. All sessions were classified as reserved.

Did the Secretary of Intelligence know about the threat of narco-terrorism on the border? Since when? What was done to neutralize it? How is the coordination of the Intelligence Secretariat with the other groups dedicated to these tasks such as those of the Armed Forces and the National Police?

The above are the questions that Assemblymen Fabrizio Villamar (CREO), Hector Muñoz (SUM) and Hermuy Calle (Alianza PAIS) intend to formulate Rommy Vallejo, who on Sunday, a day after the attack in San Lorenzo, said that the system of intelligence was working and that, therefore, in coordination with the institutions, in this case the Ministry of the Interior, captures were made before the attack.

Even the Minister of Defense, Patricio Zambrano, said that they knew of suspicious movements in the sector and it was this that led the Joint Command to have, on January 10, a military reinforcement of which, however, did not find out, For example, the Navy or its Northern Operations Command, which has under its responsibility the military control of the province of Esmeraldas.

Since the new Public Security Law was enacted and the Intelligence Secretariat was created, according to military intelligence sources that are kept in reserve, coordination was a constant and, therefore, each force worked separately and sent their reports to the National Director of Intelligence of the Joint Command. These functions are currently held by General Segundo Vega, who is the only one who maintains weekly contacts (on Thursdays) with the Secretary of Intelligence. (Esmeraldas)

From that national address, as this newspaper learned, there was no provision for military intelligence personnel about the threat of narco-terrorism before the San Lorenzo attack. The provisions came after the explosion that left 28 injured and almost 40 houses destroyed and others more affected by the shock wave.

The country has four anti-explosive units

From four anti-explosive units of the National Police, located in Guayaquil, Quito, Cuenca and Manta, the entire national territory of 24 provinces (221 cantons) is served.

That is what the country has to respond to the bomb threats, for which a protocol has been established that includes, first of all, the eviction of the people, the enclosure of the period at risk and the search of the material, with equipment and trained dogs.

The Police prefer not to disclose how many experts, teams and trained dogs are part of these groups specialized in deactivating bombs belonging to the Intervention and Rescue Group (GIR) that put their skills into practice whenever there is a threat, somewhere in the country.

In Guayaquil, in the judicial units, is where more false bomb threats have been received in recent months.

A part of these specialists in handling explosives, accompanied by criminalistics personnel, were the first to arrive on saturday at the exploded police building in San Lorenzo.

According to one expert (he asked to omit his name), fencing the place is the first step. After that, they look for and collect everything they consider that can help first to establish the type of explosive and that they are clues to follow. (I)