Unemployment insurance will be granted for a maximum of five months 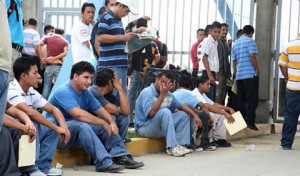 The government delivered the labor reform to the National Assembly. The new unemployment insurance pay after three months after labor stoppage.

The announced bill for the Protection and Promotion of Employment came to the National Assembly and will be processed in 30 days. Unemployment insurance is one of the innovative topics by its operating mechanism and its financing.

The resources, however, will come out from the worker himself. Unemployment funds accumulated by the affiliate in the Ecuadorian Institute of Social Security (IESS) will be the source of money. After three months of unemployment, the citizen may request a monthly amount for a maximum of five months. Such payment shall apply from the third month of unemployment because, according to authorities, the first three months will be covered with the severance payment.