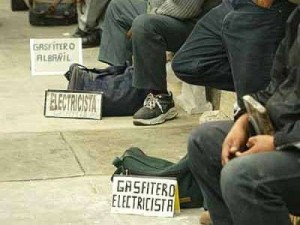 The National Institute of Statistics and Census (INEC for its Spanish acronym), said that the national unemployment rate rose in June of this year 0.74 percentage points. However, full employment also rose 5.67 points that, in the opinion of analysts, would mean that underemployed people have now obtained a formal job.

This statistics presented in the National Survey of Employment and Unemployment (Enemdu for its Spanish acronym), noted that unemployment in June of last year stood at 4.65% compared to 3.91% in the same month of 2013, “a statistically significant difference” for INEC .

Magdalena Barreiro, former Minister of Finance, explained that in her judgment, the trend of the rising in unemployment is logical, since the peak of economic growth occurred in 2011 and as this indicator falls, the unemployment rate has to rise.

The results of the INEC survey also showed that in June 2014, underemployment stood at 51.07% compared with 56.39% in June of 2013. However, there would be a 73.10% underemployment in the countryside, which according to Barreiro, would call attention because evidences that the problem has not overcome in the rural area.

Forbes will have to Asian owners