In the roundtable discussion organized by the Commission of Worker Rights of the Assembly in Milagro, Guayas province, to gather criteria relating from labor groups about the draft Code of Labour Relations, different sectors presented their positions on the monthly allocation of thirteenth and fourteenth salaries, the employer’s retirement wage, the right to strike, among other topics.

Darwin Matute, coordinator of the National Federation of Agro-Industrial Workers, Peasants and Free Indigenous of Ecuador (Fenacle for its Spanish acronym), emphasized that the union he represents rejects the Executive’s proposal in the draft code for the monthly allocation of the thirteenth and fourteenth salaries. “We want them to pay us at the relevant dates because workers need those bonds,” Matute said.

Oswaldo Pinelo, secretary of the Unique Central of Sugar Workers of Ecuador, agreed with his colleague of the Fenacle and also questioned the possible elimination of the employer’s retirement.

The spokesman of the Milagro Municipality Union, Alberto Ramos, also said he knows colleagues who “are still begging” the payment of their employer’s retirement. Ramos also added that his union rejected the official argument that the “declaration of strike (must) be held on the outskirts of the company.” “This will give the owners a chance to maneuver inside and hire new people,” he said.

The Chairman of the Committee and Assemblywoman of Alianza PAIS (AP), Betty Carrillo, said there are still several meetings to determine the pros and cons of the proposed code, which hopes to have its first debate hearing in the National Assembly on October this year. 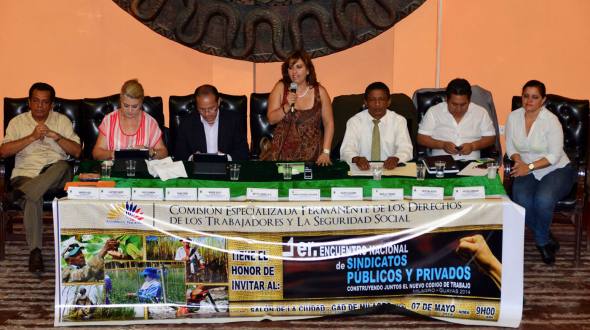 The board met for two hours and was attended by seven of its eleven members.