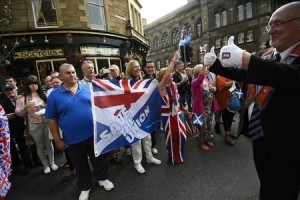 A manifestation of the Protestant Orange Order against the independence of Scotland, met yesterday to thousands of people in Edinburgh.

Members of the religious association, considered by Catholics in Ireland and the UK as a radical for his role in the Northern Ireland past conflict marched without incident in the streets with British and Scottish flags.

In the banners and placards carried by the protesters requested for the vote ‘no’ to independence in the referendum scheduled for next Thursday.

Dave Hughes, protester, said he came to Edinburgh in solidarity with the union: “We have been together for 300 years works, why break it.?”.

The official campaign against independence, formed by the British conservative, Labour and the Liberal Democrats parties, has been detached from the ‘Orangemen’ considering that his radicalism could change the minds of the pro-union people.