Michael Fitzpatrick, United States Ambassador to Ecuador, congratulated the Government of this country for its fight against corruption, insisted to the media that they continue investigating these cases and affirmed that his government will collaborate to eradicate this pandemic of cases and indicated that his country He wants neither thieves nor money from them. 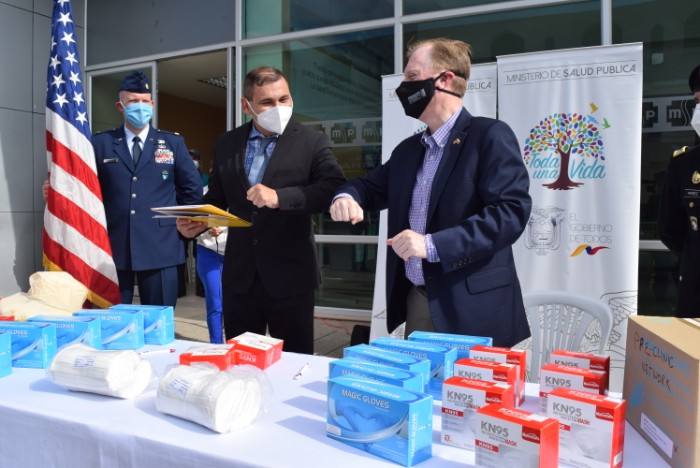 The North American ambassador made these statements this Tuesday in Manta in the visit that, he said, is the first one he has made outside of Quito after three months of the pandemic and where he arrived with a donation of masks, nitrile gloves and biosafety suits for houses of health of this port.

He noted that the United States and Ecuador are investigating so that the alleged illegal acts are known through legal channels.

“And until we can support Ecuador in investigating if there are funds that should be in Ecuador for the use of Ecuadorians, but instead of being here, it is in American banks. We are going to investigate it, of course we are, we are going to investigate because we do not want thieves, nor their money in my country, ”Fitzpatrick said after the delivery of the supplies to the health center of the Santa Martha de Manta citadel.

He indicated that he learned that they have requested asylum to the United States, and about the Bucaram visa he said that he cannot speak in public about particular cases of visas, since it is a matter of private matter in his country.

“We are always investigating, we are always studying the migratory cases that my country has … everyone has to respect the American laws, if not, we revoke the visa or deny the visa,” said the American ambassador.

He reiterated his congratulations to the Ecuadorian Government for its actions in the face of complaints, mainly in acts of corruption in the area of ​​public health. “And I ask everyone in Ecuador to do the same thing, to insist their representatives to investigate where there are problems, to improve them,” he said.

He stated that this type of incident shows acts of organized transnational crime, because he said that the American Government has seen the links that this fact has had with what happened last week in Peru, where a plane fell and in which a person named in acts of corruption in the contracting of medical supplies.

“With this flight of suspects, all of this must go through Ecuador’s judicial and legal channels and we are supporting it,” added Fitzpatrick.

After a flagrante judge from Guayaquil issued an arrest warrant against Dalo Bucaram; his wife, Gabriela Pazmiño, and his brother, Michel Bucaram, circulated the version that the United States had withdrawn their North American visa, but nothing official is known. There was also talk of a request for asylum by them, claiming to be persecuted politicians. (I)

Lenin Moreno decrees a new state of emergency in Ecuador for the covid-19; will rule 60 days