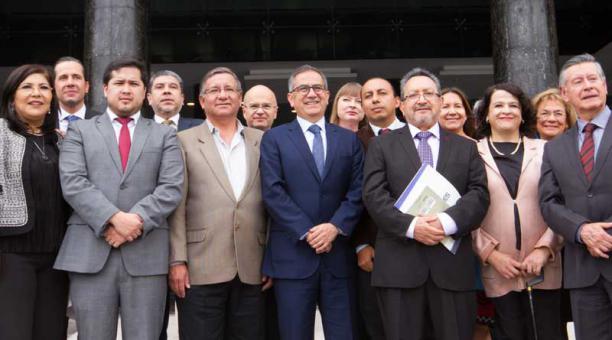 Rectors of universities and public and private institutes and also authorities of the system take the time to the Assembly. Since this month they are pushing, together, the process of the reform of the Organic Law of Higher Education (LOES), which began to be studied in 2015.

Before the end of the previous legislative period, in April 2017, the Board of Education presented a report to the first debate. But in May, the new one – with Augusto Espinosa at the helm – asked for time to make a scope of that document.

This led to the first debate on September 19, 2017. Since then, no progress was made due to lack of quorum in that commission. This, for the request of resignation to the ex-president. The previous Thursday, a delegation from the universities and authorities delivered their proposal to the Board.

Augusto Barrera, principal of the Senescyt, reviewed with this Journal eight of the points that the project that they worked on brings. I claim, “he said,” some hard aspects of the LOES. But the reform “improves and corrects errors, which did exist”. He acknowledged that in 2010, when the Law was passed, there was a group of private universities that did everything except teaching, had no classrooms, but had accounting departments. “Yes, there was a university selling titles and politicking.” But it seems to him that it lacked harmony and to value what the Academy had.

The reform incorporates other criteria for admission into the public higher education system: academic record at school and other affirmative policy issues, in regions where there are gaps. General leveling is mandatory.

The Fopedeupo remains. This year they are about USD 1 200 million. Apart it will be invested in institutes, they are USD 260 million only in infrastructure. And 60 million in current expenditure. The unearned resource will not be taken away due to late delivery.

Three rectors of: ‘U’ public, self-financed and co-financed will have a voice and no vote in the Higher Education Council. There will be a unique platform of the CES, Ceaaces and Senescyt, so that the centers are not asked for different information.

The universities requested an extension of the deadline, which expired in October 2017, to have full professors with a doctorate. They ask for five more years. A good part sent their teachers with scholarships, but they lack time to comply with the norm.

The concept of categorization is replaced by accompaniment. As a teacher, the Ceaaces will accompany more to the universities with problems. The ‘U’ accredited would be evaluated again after 5 years and not every year. The process will begin in 2019.

In addition to an academic body, it is proposed that the council of regents-which brings together promoters and owners-has power. And three mechanisms of choice of rectors are proposed. And a ‘U’ promoter from another country may contract with the local headquarters.

The list of foreign universities, from which the titles that can be registered in Ecuador are accepted, would not be valid anymore. For obvious reasons of reciprocity, if an entity from another country recognizes the career and the center, the country also.

The intervention model would change to be “harder with the authorities and softer with universities”, it would reach the suspension of them for 180 days. The intervening commission could have functions of rector, so that there is no “bicephalia”. (I)

The last call of the exporters to Moreno