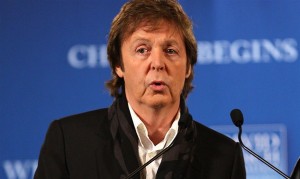 Universal Music reported that the albums At the Speed of Sound and Venus and Mars , which contain unreleased material ex Beatle Paul McCartney during his time at The Wings Group, will be reissued on September, 23.

In addition to this, it will be released also a deluxe edition which will included a book with interviews and material that comes from the personal archive of McCartneythere will also be another version where a DVD with recordings and never seen before pictures will be included.

Shakira and Pique announce they expect their second child