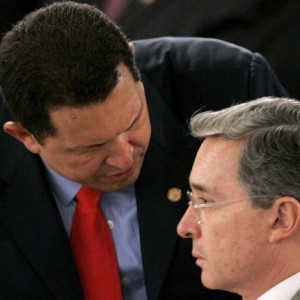 The phrase of former Colombian President Alvaro Uribe “be a man,” against the Venezuelan leader Hugo Chavez during the Latin-American summit of last February in Cancun, Mexico. This event is also registered on the WikiLeaks reports.

The document exposes the clash between Uribe and Chavez during the meeting on the unity of Latin America and the Caribbean. The discussion occurred because of the commercial block from Venezuela to their country.

Mexico sought to create a new regional forum, however the event ended badly when both presidents fought with words and they had to be restrained to avoid any physical confrontation.

During the verbal confrontation Chavez accused Uribe of sending paramilitary units to assassinate him. Afterwards the Venezuelan President stated that he was going to leave the room when Uribe claim that the Venezuelan leader had blocked the commerce with Colombia. The Colombian President stated, “Be a man. These subjects are discussed on these forums. You are brave enough to speak at a distance, but a coward to talk face to face.”

The document revealed that, the Cuban leader, Raul Castro demanded Chavez and Uribe to maintain a civilized debate. However the summit was poorly conceived. This allowed the Venezuelans and their socialist followers control the forum.