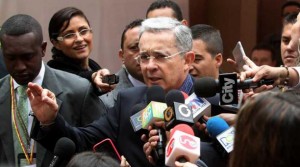 Alvaro Uribe, former President of Colombia and current Senator, will appear next week before the Supreme Court after being accused of alleged knowledge of the activities of hacker Andres Sepulveda, accused of spying negotiators in peace talks with the FARC guerrillas. Uribe announced yesterday that he will be heard by the Court.

“I have requested to the Supreme Court that my free version, on Tuesday, be before all judges of the Criminal Division,” Uribe said in his Twitter account.

The former President asked the Supreme Court to allow him to give declarations on the claims of Sepúlveda.

This, after the computer expert declared having been hired by the campaign of presidential candidate of the Democratic Center, Oscar Ivan Zuluaga, to sabotage the peace talks.