US Ambassador in Ecuador: The FBI offered assistance in the current security situation 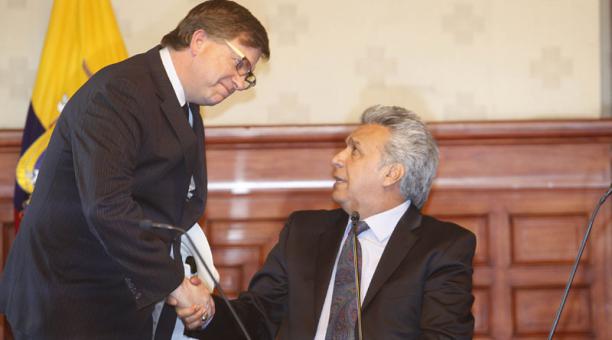 The US ambassador to Ecuador, Todd Chapman, said that his country has three areas of cooperation with Ecuador on security issues “that we will continue and expand in these months under the leadership of President Moreno.” He said that the FBI has offered assistance to Ecuador in the country’s security situation, “as other countries have offered.”

Chapman and the ambassadors of Mexico, Spain, Great Britain, China and France met with President Lenin Moreno on Tuesday, April 17, 2018 at the Carondelet Palace. The Ecuadorian Government agreed with these delegations on technological cooperation.

On the morning of this Wednesday, April 18, Chapman, in an interview on the Teleamazonas channel, detailed the areas in which he will work with the Ecuadorian Government. The first, he said, will be in technology. “There are new methods to fight these criminals.” In reference to the dissident front of the FARC self-named Óliver Sinisterra, who are attributed the kidnapping and murder of the journalistic team of Diario EL COMERCIO and now the kidnapping of a couple. Also of explosions that left the military dead and wounded.

In the interview, Chapman does not elaborate on the type of technology that could be used to locate dissidents. But “for example, to have vision from the sky, before you needed a helicopter that costs USD 15 million, now you can buy a drone for USD 500 and have the same vision,” he said.

The second issue mentioned by the US representative in Ecuador it was the training. “It’s an important issue that has to be constant with forces like the police and the military.”

The third point, he said, is the exchange of intelligence information. “It’s important because it’s not a domestic problem, it’s an international problem.”

At the end of the interview, the Ambassador pointed out that this is not the time to be ideological or nationalist to avoid international cooperation. “When we (the US) have these kinds of problems, we also talk to our international partners. We do the same during difficult times. “. (I)