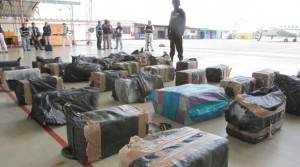 This statement, which was included in a document, was shared by the US State Department among other 79 countries and was sent to the US Congress. It is an annual report regarding the strategies used in drug control and it includes a chapter dedicated to Ecuador.

The document mentions that Mexican cartels, such as Zetas, Sinaloa, Golfo, and Farc, operate freely in the Ecuadorian territory. It is also stated that in order to move the drugs, the following transportation methods are used: ships, boats, submarines, aircraft, people, and mail. (I)