Venezuela closes its border with Colombia during night time 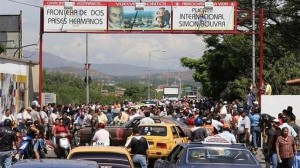 The Head of Strategic Operational Command of the Armed Forces of Venezuela announced that from next Monday the border crossings to Colombia will remain closed overnight.

Army General Vladimir López Padrino said that the measure is a new attempt to stop the so-called “extraction smuggling” of Venezuelan consumer goods such as fuel and food, to Colombia.

According to reports from Caracas, about 40% of the total volume of the products that are sold in Venezuela would be escaping to Colombia.

During the meeting between presidents Nicolás Maduro and Juan Manuel Santos on August 1, all type measures were agreed. Between them, the closure of borders to all traffic “from 22:00 hours until 05:00 hours of the next day,” said General Padrino López.