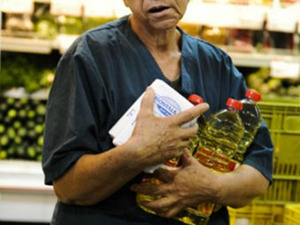 The shortage of essential products in Venezuela, not only causes strife and insults, but also deaths. Venezuelan President Nicolas Maduro asks the Attorney General to “punish” media that promote a “psychological war” that causes “nervous purchases” of the population.

According to the newspaper La Nación, an 18-year-old was the second victim of the violence generated by looting and desperation for food. The first victim was Jose Gregorio Cortez Fuenmayor, 41, who was asphixiated to death on August 9 by a mob fighting over a bottle of oil and margarine bread.

The Nation highlighted a similar case in the state of Falcon, where a woman bodybuilder hit a cashier at a supermarket for refusing to sell four packages of flour. Another case was that of a young man of 19, who was stabbed in the abdomen and lungs, for not allowing “savvy” people to skip the row outside a supermarket in El Tigre.

To Maduro this is because the Venezuelans make impulse purchases, said last Saturday’s recalling the events at a market set up by his regime. Where many people where “buying out like ants and carried twice the weight of what their body endured. They had everything.” The president made a call “to serenity” when buying supplies.

Russia will not support sanctions on Syria