Venezuela will have Human Rights council by suggestion of Unasur 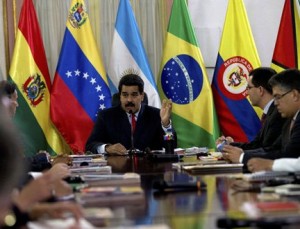 President Nicolas Maduro today accepted by suggestion of a committee of Foreign Ministers of UNASUR to create a Human Rights council.

“One recommendation to President Maduro is the creation of an office, an entity of human rights or a human rights agency depending directly to the National Executive,” said Vice President Jorge Arreaza in a television appearance.

According to the Vice President,  complaints of alleged violations of human rights will be received. The organism will be composed of community representatives, non-governmental organizations and other organizations of the sector.

“The President, in a dialogue with Chancellor Maria Angela Holguin of Colombia … immediately accepted this suggestion as he accepted others” said Arreaza.

This is the first recommendation to President Maduro that the Union of South American Nations (Unasur) made public, whereas is expected a report from the Forum that would eventually be released on Thursday.

Extra Newspaper, received a fined of 10% of its last quarter turnover